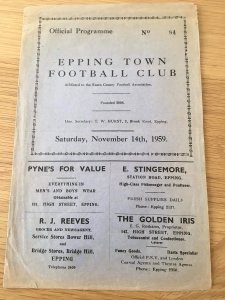 The club became founder members of the Greater London League, and were placed in the “A” section. A seventh-place finish in 1964–65 was enough to earn a place in the Premier Division the following season. In 1966–67 they won the league, before joining the Metropolitan League in 1969. They won the league in 1970–71, but at the end of the season the league merged into the Metropolitan–London League, which Epping won at the first attempt. The following season they were runners-up, before winning a second title in 1973–74.

The club resigned from the league midway through the 1984–85 season due to financial problems, and the club folded at this time.

Since then there have been several attempts to resurrect the club but now the club are back and ready to kick off the new season on September 8th 2018, playing in Senior Division Four of the Essex Olympian Football League.